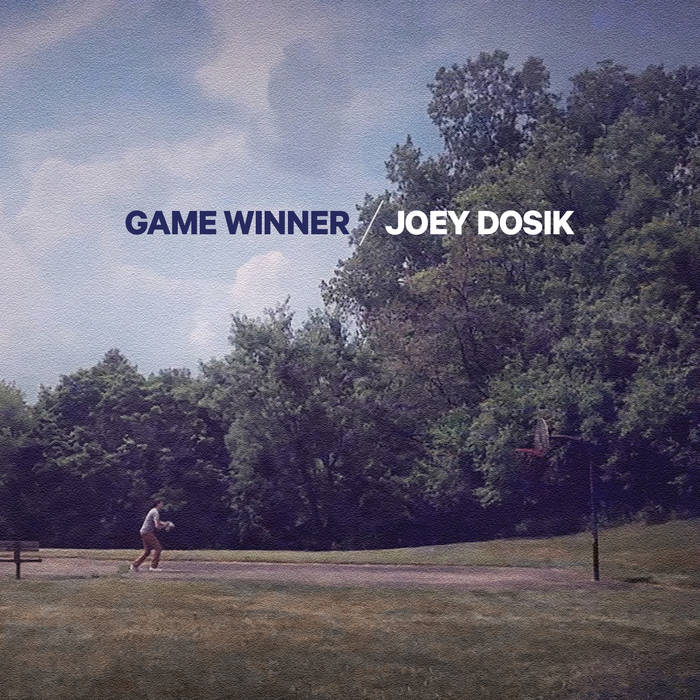 Bjarkill From the first note I am in the music not listening to it.

Joey Dosik didn’t set out to make a conceptual EP about basketball. It was his first love before music, and some of his earliest memories are of attending Lakers games, but he’d never thought to look to the sport for inspiration. But when Joey blew out his knee during his regular pick-up game and had to undergo reconstructive ACL surgery, he found himself confined to the couch, watching a lot of television and waiting to resume his normal life. He gravitated toward basketball, and when he started recording again, he found it seeping into his writing. The result is Game Winner, a brisk, emotive collection of songs loosely inspired by the language and lore of the game.

The marriage of sports and music usually brings to mind corny arena jams or get-hyped anthems. 'Game Winner' is anything but that. At once cool and confident, it mirrors the NBA’s trademark swagger, as well as Joey’s journey back to music—and his belief that he could get there. It’s no accident that during this time, Joey immersed himself in gospel to lift his spirits, particularly Detroit’s Clark Sisters. The title track may be about a big win on the court, but its pleading melody and percussive piano point to something larger.

By nature, Joey isn’t a solitary creature. He’s an inveterate collaborator who has worked extensively with the likes of Vulfpeck, Nikka Costa and Miguel Atwood Ferguson, and who is a vital part of an LA scene that updates vintage sounds into a more contemporary context. But Game Winner was a very different project with a very different process. And while he enlisted some help as it developed, the lion’s share of the EP was recorded solo in Joey’s home studio.

Following his surgery, Joey essentially had to build himself back up from scratch. And like an athlete coming back from a major injury, it was the finer nuances – those subtle moves and intricacies that make your skills your own – that took the most time and the most sweat. “It was my healing space,” Joey says. “I was recovering from my injury, icing down ten times a day, doing therapy, getting on the exercise bike. One basketball theme turned into another and I realized I was really getting into music as therapy… trying to heal myself physically and mentally.”

While at times impeccably stylized, Game Winner has a candor to it that, oddly enough, ties directly back to his relationship with the sport. “I’ve been loving sports my whole life. It’s something I can write about, sing about, and be passionate about in a real way. It’s genuinely me; it allowed me to be more honest as an artist.”

“Competitive Streak” is a spacey, earnest groove that shouts out Joey’s boyhood idols Magic Johnson and Kareem Abdul-Jabbar without shattering the mood. Stylistically, basketball of the past also proved to be a source of material. “I used to watch VHS tapes like Magic Johnson’s instructional video Put Some Magic In Your Game or Michael Jordan: The Air Up There over and over again,” Joey says, “and with ‘The Night Before,’ the opening solo piano track, I was imagining something that could’ve been the soundtrack to one of these ‘80s videos.”

He also drew from other sounds associated with that era’s NBA, like Sade and smooth jazz curios that “may have been lost forever.” “Running Away,” the pulsating ballad, has elements of nostalgia to it, maybe even shades of vintage Marvin Gaye, but the chorus slaps in a way that feels utterly contemporary. “Competitive Streak” blends eras with ‘70s-style orchestrations, modern soul flourishes, and guitars wholly in step with the pop of today.

The common thread here is musicality and song craft—the two pillars of Joey’s sound. “The most important thing is the song,” explains Joey. “Songwriting won’t go out of style.” It’s that approach, one that thinks beyond style, that gives the EP’s title track its magic. Minimal and almost languid, “Game Winner” has a confidence that’s hard to place in time, an ease that meets a buzzer-beater just as well as it meets a Sunday morning.

Game Winner may be a snapshot, but it’s hardly an anomaly or an outlier. It’s Joey doing what he’s always done. Basketball may have been Joey’s first love, but the sport is also the perfect metaphor for where he’s ended up musically, always striving to stay timely and timeless, to bring deep, foundational elements in sync with innovation and imagination.