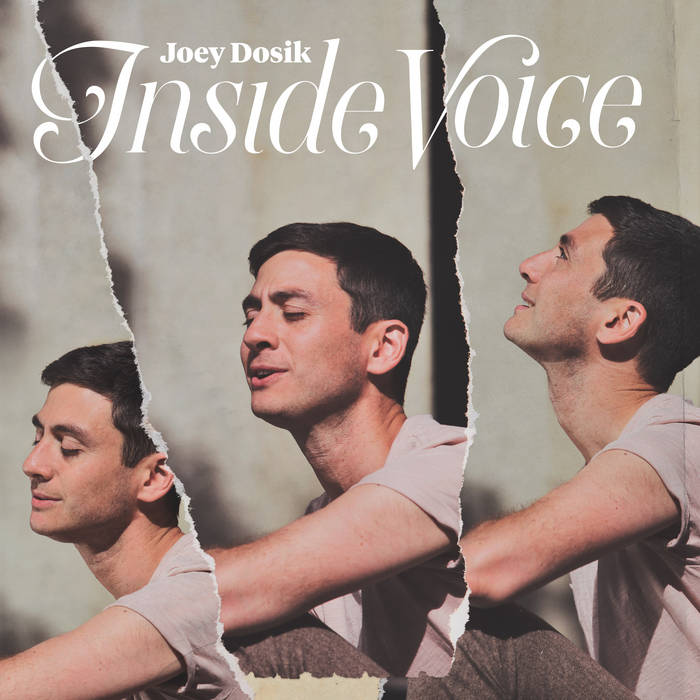 g_regontheweb The beautiful instrumentals mixed with heartfelt lyrics make this album a beautiful moment in your day. Dosik knows how to catch and hold your emotions. Favorite track: Inside Voice.

Cait Jeff Just when I thought I couldn’t be more blown away by Joey Dosik, I then caught his live set. MIND BLOWING. A force to be reckoned with. Favorite track: Past the Point.
more...

If you’ve been following Joey Dosik’s career at all, it should come as no surprise that ‘Inside Voice’ consistently, utterly nails it. Dosik has honed his craft as part of a burgeoning Los Angeles scene that reinvents past forms of popular music to exist in the present tense. He is a regular collaborator with Vulfpeck, was named by Quincy Jones as an artist to watch, and has released music of his own, most recently 2017’s EP, Game Winner. On his full-length debut, Dosik starts out simply enough – glimpses of Dosik’s vocal range hover over a sparse piano and guitar arrangement, anchored by snapping fingers. It’s quiet but — in keeping with the song’s concept, which Dosik described as “deep, sexual, but also kind of silly”— it’s also a thrilling, intimate moment, one where the purity of the melody and Dosik’s spot-on phrasing fall perfectly in line. For as prolific as he’s been, and as much of a name as he’s made for himself, it’s only with 'Inside Voice' that Dosik is getting the chance to show how much he can do, and how much ground he can cover without losing sight of his foundation.

There’s a level of control and depth on ‘Inside Voice' that’s rarely achieved in a debut, and the result is an instant classic by any standard. The title track opens the record, building gradually into 1970s-style sweet soul, complete with lush strings and a loping groove, putting a decidedly modern twist on a classic form. Dosik, a huge basketball fan, understands the value of building on the fundamentals. In fact, this bare bones approach is absolutely crucial to how he writes. “I like to write with the idea that I could perform any song by myself at the piano,” he says. “In 2018, that feels radical to me, because so many people perform with tracks.” Dosik’s songs never come off as formulaic or impersonal—he owns every note.

That’s why “Inside Voice” is followed immediately by “Get It Right,” a melancholy, Marvin Gaye-style plaint that balances hope with despair. “Stories” deftly splits the difference between gospel and Paul Simon, and on a Bill Withers cover, no less. This always coming back to the core of classic American songwriting is what makes 'Inside Voice' so satisfying, and it echoes through the record. “Take Mine” plays with negative space to heighten drama around a repetitive, gut-punching melody; what feels like a love song is actually a plea for unity against the turbulent backdrop of present-day politics. “Emergency Landing,” with its slow drag rhythm and gossamer arrangement,
continually rallies around Dosik’s introspective yet determined vocals.

For its stripped-down eloquence, 'Inside Voice' is also a deep, rich record on which, as Dosik puts it, he “got to play the studio like an instrument.” It’s also a nod to the LA recording scene of the early 1970s when, as Dosik puts it, “there were great studios, great session musicians, and great songwriters” who fell all over the stylistic and demographic map. That’s what Dosik sought to recreate by drawing in collaborators like Flying Lotus associate Miguel Atwood-Ferguson, who arranged all the strings, and the shapeshifting, genreless Moses Sumney, who contributed backing vocals. And while not
native to the city, the polymath Mocky, who has produced recordings by Jamie Lidell and Feist, ran point on several tracks. Like his idol Carole King, Dosik is an endlessly resourceful lyricist who can paint a picture vividly, as the heartfelt “Grandma Song.”  Dosik excels at doing more with less, and his sophistication can also surprise. And while 'Inside Voice' places a premium on economy it doesn’t skimp on musicianship, as on the album’s hardest track, the crackling, boogie-inflected, “Past the Point.”

'Inside Voice' doesn’t just bring together figures from around the city. It’s also a mélange of styles across the years. Dosik himself acknowledges, “the challenge lies in making a record very much rooted in the lost golden age of recorded music, while staying modern.” That’s the unspoken credo of what Dosik and his peers have been doing for years. But with 'Inside Voice,' he has the opportunity to really dig in. There are certainly some familiar touchstones on the record. There’s also a lot that’s undeniably contemporary here, from Dosik's production touches to his insistence on always being himself lyrically.
Ultimately, Dosik draws on the past as a point of departure for making music that’s fresh and contemporary—after all, the best musicians “have always bent the rules.” Across ‘Inside Voice,’ Joey Dosik does a remarkable job of both honoring those rules and deviating from them, letting his uncanny gift for crafting a song guide him at all times.

But to simply nod at the record’s craftsmanship misses the point. ’Inside Voice’ is a record that both honors and transcends its references, challenging the constraints of genre. It’s brimming with emotions that can lift you up or break your heart. It’s catchy as hell and can haunt you for days. You can take a casual pass at it or spend hours listening on repeat. Either way, ‘Inside Voice’ will get to you. Because Joey Dosik writes human music for human beings. And boy does he write the hell out of it.